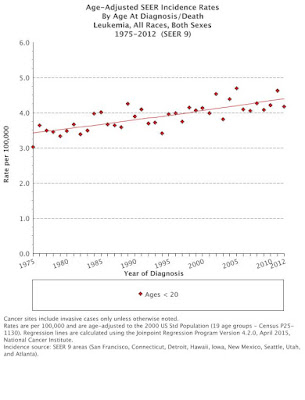 Tara Haelle, writing for NPR recently, tells how a university press release, inaccurately entitled "Study explains how early childhood vaccination reduces leukemia risk", was covered widely in the press last month. The release attempted to explain newly published research carried out, in part, at UCSF. She describes how conversations with the senior author of the study failed to temper some questionable passages in the press release, and how follow-up with other researchers expert in vaccines helped to provide clarity. It's a good article and I recommend reading it. The bottom line, she suggests, is to always be skeptical of press releases.

That's certainly sage advice. I don't want to go into the details of this particular case; Haelle does that very competently, as do others, and it's easy enough to check the face validity of the claims of the release and author interview yourself via the SEER Website and FDA vaccine license time lines. Rather, I want to step back from the details and think about the episode more broadly.

This is a case of a group of scientists carrying out research that passed peer review and was published in a prestigious journal. When such a study is published, universities understandably want to make the presumed important information available to a broader audience. The titles and topics of many research articles probably won't draw the attention of casual readers, so universities have media relations teams that work with researchers to write press releases and help investigators interact with the press. One danger of this, and again it is understandable, is the potential for over simplifying and overselling research in order to make it accessible and relevant to the public.

It can also lead to a misunderstanding of the process of discovery. Medical science is a fluid, dynamic endeavor in which knowledge emerges iteratively, often triggered from conflicting results. Rarely does one study show anything definitively. In fact, many findings described in peer-reviewed studies are refuted later by the findings of other peer-reviewed studies. It has been argued that most published research findings are false, and recent evidence suggests that an alarming number of published results aren't reproducible. It reminds one of a quote attributed to physicist Wolfgang Pauli,


I don't mind your thinking slowly; I mind your publishing faster than you think.

Regardless of publication rates (and the pressures leading to those rates), knowledge emerges as conflicts are resolved, which can take years or even decades. It's unclear whether this is widely understood by those consuming medical and scientific information via the popular press. We need to think about how to communicate both new scientific findings and the process of science to the public more effectively.