A voice from the past: I told you so 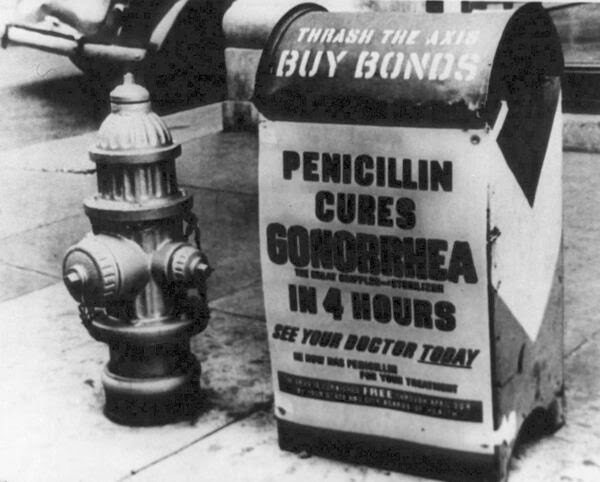 This picture circulated on Twitter recently. To many it may seem amusing, even quaint at this point nearly 70 years after the shot was taken, but it is also sobering.

The CDC's recent report on  Antibiotic resistance threats in the United States, 2013 lists drug resistant Neisseria gonorrhoeae as one of the three most "urgent" threats in terms of antibiotic resistance today (the other two being CRE and C diff), along with 12 other "serious" threats (including ESBLs, VRE, MRSA, and DR-TB) and 3 more merely "concerning" threats. The issue of drug resistance will only get worse unless something is done to counter it; unfortunately, it's a very complex problem at this point.

Curiously, and prophetically, Alexander Fleming, at the end of his Nobel lecture in 1945, warned that resistance would be a problem if administration wasn't managed carefully:


But I would like to sound one note of warning. Penicillin is to all intents and purposes non-poisonous so there is no need to worry about giving an overdose and poisoning the patient. There may be a danger, though, in underdosage. It is not difficult to make microbes resistant to penicillin in the laboratory by exposing them to concentrations not sufficient to kill them, and the same thing has occasionally happened in the body.

He continued with a vignette:


The time may come when penicillin can be bought by anyone in the shops. Then there is the danger that the ignorant man may easily underdose himself and by exposing his microbes to non-lethal quantities of the drug make them resistant. Here is a hypothetical illustration. Mr. X. has a sore throat. He buys some penicillin and gives himself, not enough to kill the streptococci but enough to educate them to resist penicillin. He then infects his wife. Mrs. X gets pneumonia and is treated with penicillin. As the streptococci are now resistant to penicillin the treatment fails. Mrs. X dies. Who is primarily responsible for Mrs. X’s death? Why Mr. X whose negligent use of penicillin changed the nature of the microbe. Moral: If you use penicillin, use enough.

It seems he had remarkable clairvoyance. Although antibiotics can't be "bought by anyone in the shops" unless they have prescriptions, they are low cost and sometimes even free. They probably are very over-prescribed.

Just to bring things full circle, the annual CDC survey on STDs depicts increases between 2011 and 2012, with a large number of infections due to gonorrhea. The report notes that


With increased resistance to the fluoroquinolones and the declining susceptibility to cefixime, dual therapy with ceftriaxone and either azithromycin or doxycycline is now the only CDC recommended treatment for gonorrhea. (Emphasis added.)

Posted by David Hartley at 3:53 PM